Browsing through the dollar store the other day, a couple of bright soft cleaning clothes caught my eye. They seemed far too pretty to be used for so mundane a task as dusting so I took them home and turned them into a monster for my little boy. 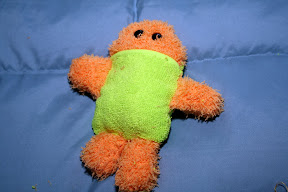 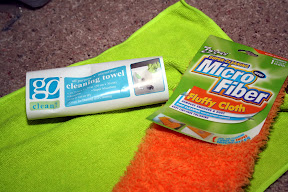 * Two cleaning clothes from the dollar store in different colors
* Thread or embroidery floss in colors to match the fabric
* Small amount of Polyfill stuffing, or use fabric scraps.
* Two safety animal eyes (optional: you could use buttons if not giving to a small child, or embroidery)
* A small pill box with a tight fitting lid and a few kernels of unpopped popcorn or rice (optional, for rattle. I got my pill box at REI for $0.40. You could also use a plastic cap from a pop bottle sealed with a piece of cardboard and tape, although this would render the finished piece unwashable. You could also use a jingle bell, with the same drawback.)

Skills:
* Hand sewing or machine sewing
* Confidence to draw your own pattern 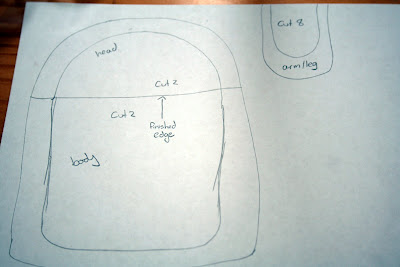 The basic shape for the body is a squared-off egg. I traced around a water glass for the curve for the head. The arm / leg shape is roughly the same, but at about 1/6 the size.
* Cut the pattern out with paper scissors. Use pins to attach to cleaning clothes and cut pieces as follows
* Cut two body pieces from green cloth, with the edge along one of the "selvages" (that is, the finished edge) of the cloth
* Cut two head pieces from the orange cloth, adding about 1/2 inch for seam allowance
* Cut eight arm / leg pieces from the second cloth
* Match one head and body piece, sliding the right side of the head under the right side of the body about 1/2 inch. Sew with a simple running stitch. 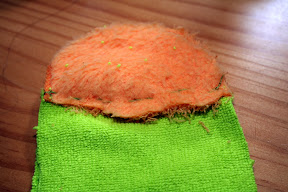 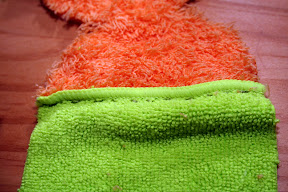 * Match the wrong sides together of the arm / leg pieces to make four sets. Sew with a running or whip stitch. I found a whip stitch easier as it made for a smaller seam allowance.
* Turn arms and legs right side out and stuff with a small amount of polyfill 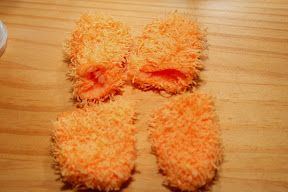 * To attach the safety eyes, cut two very small slits in the face piece in the desired location. Slide the eyes through and fasten the washer. It takes a little muscle to get it on, but it won't easily come off again! 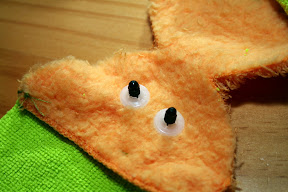 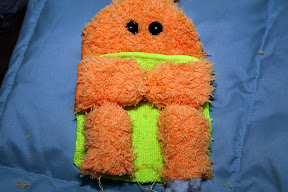 * Lay the other half of the body / head piece over the top, right side down. Pin arms and legs in place firmly.
* Sew body pieces together, taking care to go through all four layers at arms and legs. Again, I found a whip stitch easiest. Be sure to leave 1/2 of the head open for turning!
* Turn the monster right side out.
* If making a rattle, add the popcorn to the pill box. If desired, super-glue it shut to make a water-tight seal. Place pill box inside monster. 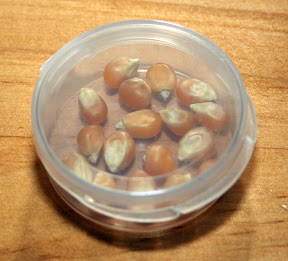 * Stuff monster with pollyfill
* Sew shut the second half of the head with the invisible stitch of your choice. The orange fabric is so fuzzy, though, that nothing much is going to show.
* Give to small child. Try to ignore the screams: he'll grown into it! 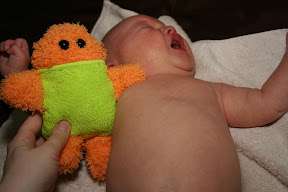 Optional Customizations:
* Cut a 1 inch length of the finished edge from the green cloth and attach to the center of the collar on back of the monster. Now you can attach a loop or clip for hanging from a toy bar
* Cut a similar length of finished edge from the orange cloth and sew in back for a tail
* Embroider a design on front of monster's "shirt"
* Add a mouth cut from felt, or embroidered
at June 27, 2009