And now for another in the series I call "Dumbing it Down," or "Making it Even Easier"
Browsing Pinterest the other day, I came across a cute little activity called the "Crocodile Game."
I thought "what a great idea! I'll bet both my four year old and my two year old could play!"
But... as simple as it is, it used a container I didn't have, construction paper I didn't have, google eyes I didn't have, and frankly Time I didn't have to put it together.
So, I reminded myself of my new favorite rule of homemade toys: 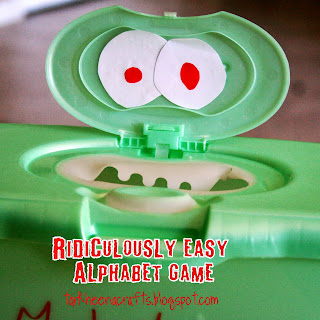 Then I grabbed an empty diaper wipes container - something few families will be without, I expect!, a piece of paper, and a pen.  Oh yeah, and a pair of scissors and some double-sided tape. But seriously, use whatever is on hand.
In something under five minutes, I had not a Crocodile but a Monster.
I then pulled out a set of alphabet magnets I found super-cheap on Amazon and gathered the kids. 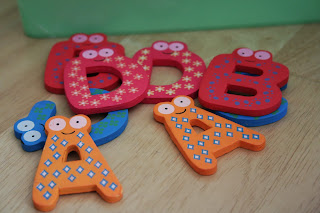 How to Play
Each player takes the monster box and repeats a little rhyme
"Monster, Monster, open wide
What letter do you have inside?"
Then he or she draws a letter from the "mouth."  If he can identify it, he keeps it.  If not, it goes back in the box.  The winner (if you need one) is the one with the most letters. It's as simple as that!

Tips for Playing with Different Ages and Ability Levels.
My kids are 4 and 2.  The older one knows about 1/3 of his letters solidly, and the younger only a small handful.
The first couple of times we played, the kids stayed engaged for at least 20 letters.  Both loved saying the rhyme, and my older one tried pretty hard to ID the letters.  The younger just wanted to play with the letters, which I let her keep regardless of getting them "right."
We did not worry much about who won: my son declared himself the winner, but really neither is at that stage yet.
The second time we played I decided to work on identifying colors with my 2-year-old rather than letters since she's still not solid on them. This allowed both of them to challenge themselves without either having a ridiculous advantage.
Another time, I combined the game with our (highly inconsistent) "school time:" we watched some Sesame Street letter videos from YouTube focusing on the first few letters of the alphabet, and then I populated the box with just the letters we'd reviewed.  This time both kids were able to ID most of the letters.

This is a game I can easily see growing with the kids. We can move on from letter recognition to sound recognition, then sounding out simple words (while, perhaps, the younger one keeps focused on simply ID'ing the first letter), even numbers and simple math.  Really, anything that you might use flashcards for.
I can even imagine packing the box with small objects related to whatever we're going to be studying and using the game to introduce the concept - asking the kids to identify the common characteristic.

I'm quite excited about this ridiculously simple game, and I hope you find it useful for your own kids!

Adorable game! You could use numbers and words too!

Super cute game! I love that it took you less time to make than it did to play with. :)
Heidi